noson1, Temecula
Played 4/8/19; there's no better value in south riverside county...Played here for many years and its never been better. Less than a 4 hour round playing with my 10-15 handicapped foursome. Only issues is the grass gets thin and the ground is hard around the water areas, so caution is needed with the extended roll...along with some attention to sand levels in the traps, and conditions would be ideal. Tony the starter is a comedian and gets your round off to a good start.
Posted: Tuesday, April 16, 2019
Member Since: April 24, 2011
Read ALL My Golf Course Reviews

noson1, Temecula
Mid-morning round brought us back here on Monday after a couple year hiatus...
I will say that most of the posted pictures, although old, are still pretty good representation of the course today, minus any scenes with water as there wasn't any.
Greens were in magnificent shape, not to fast or slow. Fairways a bit thin, sand was dark/wet mud like, but got out of them ok.
At the start, there had to be at least a 10 minute gap between the twosome teeing off in front of us and our foursome, that resulted for some reason in a big backup at the 4th, par 3...
Had to be a solid 4.5 hour round with the twosome always in our sites...
Would play again as it was a pretty good value for caliper of course.
Posted: Wednesday, May 16, 2018
Member Since: April 24, 2011
Read ALL My Golf Course Reviews

7 Likes.
The Links at Summerly
Lake Elsinore, CA
Reviewed by:

Course is making a comeback!! I'm gonna give it an A+ for effort to this point, but a C+/B- for overall conditions. The same overseeding task continues on the remaining three or four holes allowing no carts, one hole on the back actually as a temporary green @ 100yd out, drastically reducing a par five.
Greens are in pretty good shape, with some having issues on their parameter. Most of the bunkers looked to have numerous small small rocks.
The Burns scattered throughout the course could be surprise, but they provided a course guide along with GPS in carts that provided all the needed distances to avoid them.
Played Saturday morning @ 8 in a foursome, and the only time we slowed down was to allow a couple twosomes play thru...This place could use a push of activity to keep the rehab efforts going, which I'll soon be returning. Also a good staff for wrapping things up @ the 19th.
Posted: Monday, August 14, 2017
Member Since: April 24, 2011
Read ALL My Golf Course Reviews

OK, so what do you want to do....(1)Play an imaginary game at the range with a large bucket of balls or (2)for close to the same $$$'s play a course that you can see results when practicing working the ball in dog legs, hitting it straight, play out of decent sand around the greens (fairway bunkers pretty hardpan), battle the tree lined fairways all the while working on your "Tiger" save shots, approach shots biting the green fairly well with about 75% of them having pretty good putting surfaces, then this place will work for you.
Played yesterday (Saturday) morning (8:45) for $22 bucks that includes cart!!! The setting is pretty much a municipal type course, 3 tees to choose, along with what seemed to be maybe a juniors tee that was setup way, way up front.
Your "practice" session will be to stay in the fairways if you want any chance of hitting off grass, whereas beyond the tree line is a dirt environment with some weeds mixed in. Note; even some areas of the fairways you'll find your ball sitting in a bare spot. After discovering this, my group decided to just move to the nearest grassy area and continue on if desired. Again, our mindset is practice round. Areas around the greens were decent, thick at times, to chip out of.
Because of the price, this is the ideal place for beginners to get the feel of the game, or occasional players (like me), that like a practice round to work out the kinks (instead of a bucket or two), before playing in the money rounds.
Posted: Sunday, May 22, 2016
Member Since: April 24, 2011
Read ALL My Golf Course Reviews

noson1, Temecula
Pleasantly surprised!!! Usually with an economical round, your expectations are low. Here there are various elevation changes having great views, no side by side fairways, and greens having an excellent surface. Other then the traps being firmly packed, for a 50 year old course this place has plenty to offer any type duffer. I'll be returning...
Posted: Thursday, April 7, 2016
Member Since: April 24, 2011
Read ALL My Golf Course Reviews

noson1, Temecula
This is a place with the old time feel. Pretty much a municipal course atmosphere, with outstanding greens. Very flat, easily walked. Good mix of left/right dog legs, with all fairways being tree lined.
Not a glamorous course by any means, but it's a very satisfying place to work the ball, hit it straight, with challenging approaches to sometimes smaller then expected greens for the first time player.
I'll go back..........
Posted: Thursday, June 11, 2015
Member Since: April 24, 2011
Read ALL My Golf Course Reviews

noson1, Temecula
Enjoy this course with its variety of holes. Fairly wide open, a few holes with elevation changes mix it up a bit. The waterholes have been either overgrown with tall vegetation or very low levels. Course was a bit wet with an early 8am tee time, so they're pumping water on it.
All but one green was in pretty good condition, (the bad one looked liked maybe their lawn mower leaked gasoline over it having 5 or 6 three inch wide streaks of no grass from end to end). All the others were in good shape, but ran medium to slow. Shots held pretty good.
Plenty of fairway bunkers to maneuver, being fairly hardpan. A couple of the green side traps I witnessed had some real nice soft, thick sand, (but can't say for all).
Fairly nice go-to course, but not on the glamorous side.
Get on their email list to take advantage of the occasional deals.
Posted: Friday, May 1, 2015
Member Since: April 24, 2011
Read ALL My Golf Course Reviews

This I believe is as close to a resort course as you can get in south-west Riverside county.
Conditions were close to immaculate, top notch practice areas open to those that play, and a few one-of-kind tee shots that'll make you want to scratch your head.
Lots of elevation changes, oak trees and bunkers in the middle of fairways that make you want to do your homework prior to your round.
Afternoons tend to be a bit breezy complicating the higher elevation tees a whole lot more than they already are!!!
If there was an adage that said, "the more it cost the tougher the course", then this would be the place.
Although the $$'s to play has come down dramatically since it opened, still look for deals, especially on their web site if you know someone in the area.
This is one course everyone should play & experience at least once!!
Posted: Thursday, April 23, 2015
Member Since: April 24, 2011
Read ALL My Golf Course Reviews

The overall conditions continue to be above average every time I visit. Greens were rolling pretty nice after a 1/4" punch three weeks prior. I couple guys I played with "complained"??, that the course was a little to narrow for them. Plenty of tree lined fairways to maybe give you that feeling, but to me it just adds to the overall beauty and challenge here.
All the greenside bunkers were recently replaced with new sand. They've trimmed some trees, (especially 18th green side), that open it up a bit. Staff very friendly, fairly large practice green & driving range.
If you like great scenery, quiet, birds chirping, you won't be disappointed.
This is my go-to course for my out of area friends,
Posted: Thursday, April 23, 2015
Member Since: April 24, 2011
Read ALL My Golf Course Reviews

9 Likes.
The Links at Summerly
Lake Elsinore, CA
Reviewed by:

Between tee box and greens, this course is under disarray. Have always enjoyed its layout, but now its like playing on the moon, having more exposed bare sandy soil areas than something maybe called grass. They blame the recent reseeding efforts on the freak snow storm at the end of the year for its devastation.
Once you get to the putting surface, you're rewarded with some pretty good conditions. In fact, many of us who ended up just off the green were using our putters since any signs of grass was so short made it quite easy to deal with.
Understand that the management issues have been troubling in the past, but seems to be an effort to get things on track even though the course is closed now on Mondays & Tuesdays.
Clubhouse, food & beverages, along with a nice view of the valley from the back patio still continues!
Posted: Wednesday, February 4, 2015
Member Since: April 24, 2011
Read ALL My Golf Course Reviews

First time out here and was very enjoyable. Fairways short, rough a bit thick at times. Fairly wide open to hitting areas, with no multi-level greens making it a bit easier to read.
Overall course conditions were a bit wet with a 9am tee time. Sand, although dark in color (almost like mud), was nice and deep in the five traps I entered. Course had some beauty to it as well, with all the lakes full, water-falls operating, making for a perfect setting. A certain course to return too!!!! This is also home to the best cart GPS system I've ever come across. Big screen, birds eye view of overall hole and green closeup, along with distances to all the hazards.
Posted: Wednesday, October 22, 2014
Member Since: April 24, 2011
Read ALL My Golf Course Reviews

noson1, Temecula
Top level course all the way from the staff down to course conditions. Each hole unique, many hitting over waste areas, bunkers with deep soft sand, roughs being the tall fluffy type with the ball settling a bit down, and challenging putting surfaces. I can't comment on the greens themselves since they had just punched them about three weeks prior, and although most were good, a couple showed signs. I'd imagine in two weeks they'd all be absolutely perfect.
For me, this is the kind of course where one treats themselves occasionally to the finer thinngs in golf. Although pricey, there's deals out there that get it down under a "C" note if you look.
Posted: Monday, October 20, 2014
Member Since: April 24, 2011
Read ALL My Golf Course Reviews 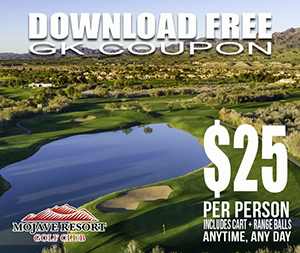